The Artist as Harbinger:
“Ventre”
by Nihil and In Slaughter Natives

“Since it is by sensation that disaster has crept into the world,
the best thing would be to annihilate senses, and to let ourselves
fall into a divine abulia. What plenitude, what expansion, when we
count on the disappearance of our appetites!” (Cioran, On Sickness)

A similar sentiment to that of Cioran’s is relayed throughout the writing in Ventre, a collaboration between artist/writer Nihil, and the band In Slaughter Natives. Nihil’s texts are filled with imagery of beings suddenly conscious and self-conscious, suddenly aware, in limited measure, of their circumstances and their suffering. His writing is a sequence of myths and allegories for our era of decline, with their industrial and medical imagery, they articulate ancient fears about our consciousness and the incomprehensible in life, much as did Job and Ecclesiastes — one forsaken by God, wishing he’d never been born to suffer loss at his creator’s behest, the other understanding “there was no profit under the sun.” (2:11), a realization which comes with enlightenment, the negation of all illusions and all safety in painful gnostic moments where the void is revealed and our fantasies fade. Nihil’s work amounts to the documentation of a series of attempts to achieve that state, and the unfortunate consequences of both failure and accidental success.

These themes are exemplified in the short text, Awakening: ostensibly about a hospital patient enduring various states of mental agitation, the story combines Nihil’s obsession with biology with that of mysticism, where extreme emotional states result from decay and our supposed insights into the world or ourselves result from our scars, from our victimization and our attempts to suppress what resulted of our traumas. Best depicted, for me, in the portrait Victime: an anonymous kneeling nude, face covered in a gimp mask, dry blood on the hands, gash across the gut like a C-Section scar — victimized by unseen forces, possibly separated from offspring, agonized by that deprivation. By the physical pain and circumstantial ignorance. We see layered pains during the deconstruction of an uncertain identity reduced to living as a violated object, with every moment after defined by that state, by the response to it, the interpretation of which we call wisdom. Under this, the track 113th Scar resonates as an eerie industrial chant or moan communicating alien feelings, none of which are received, having been distorted by the communication process. The sounds of creation and industry obscure the sorrows beneath, hidden so we can focus on progress and our collective growth which only results in augmented Isolation: crushing monotony and smothered voices guided by rage, ethereal voices from our haunted history of collective failure: despite varied appearances, all failures are the same, all amount to the same ending.

Though the sense of isolated agony is later contradicted by the story Fragment 004 – recreated by Nihil as an eerie spoken word track on the album — about a recurring character, The Firstborn: a figure who is part Demiurge, part Adam, and part Schopenhauer’s Will to Live — the central figure around which all the stories revolve, a being both singular and torn apart by its multiplicity. Like an infant being violent to a new toy, a being of pure id, blind and mindless and acting on impulse, causing violence to the world and its lifeforms simply by existing, much as we do when our attempts at goodness fail or cause the opposite result of what was expected given the limits of our vision and our ideals, so contrary to the world we inhabit. There our alienation is counterbalanced to the violences in which we all partake. 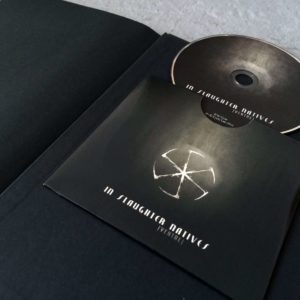 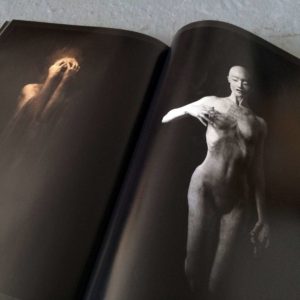 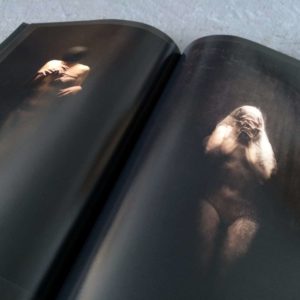 The imagery of his book are portraits of forgetting, that attempt at lost consciousness. So many of Nihil’s figures have no eyes or have covered faces, blindness being a recurring motif in his writing, showing how our limited knowledge does nothing to save us and only serves to remind of those limits. We suffer for our incapacity to transcend those limits. Regression is our other option, retreat from the tortures expressed in the song Ananda: melancholy voices crescendo along the wailing movements of mood suggesting punitive repetition. Repeat pains bind Nihil’s work together, as tedium and banality and routine are broken in extreme states. As Georges Bataille wrote in Inner Experience: “NON-KNOWLEDGE LAYS BARE…NON-KNOWLEDGE COMMUNICATES ECSTASY. Non-knowledge is ANGUISH before all else. In anguish, there appears a nudity which puts one into ecstasy.”

That naked ecstasy is the conduit behind the masochism in Nihil’s imagery. His work is fixated on decay, on the slow destruction of self, our reduction into the nothingness essential to the impermanence of everything. Each portrait depicts a transitional moment, between degrees of individual consciousness in the attempt to destroy it and rid oneself of the burdens of self-awareness, to which the soundtrack by In Slaughter Natives serves as an anguished prayer in the sense described by Teresa of Avila in her autobiography — an ascetic union with an indifferent force destroying the illusion of individuality. The combined effect of the music with the visuals and the texts gives the impression that one is witnessing a mystical moment, that the document itself is an ascetic act, a kind of personal exorcism, as each portrait extracted from the artist and he is slowly corroded to his final state, as yet unseen by even him, but which is hinted at on the track One Last Farewell. Subdued ambiance, inaudible chattering, disaster sounds, Wagnerian dramatics and apocalyptic theatricality: an indifferent witness to the end of everything, the moment of his unification with all matter after the death of consciousness…

Nihil is an apocalyptic artist, a harbinger announcing our end in oblique parables and distant imagery. If one imagines him, one is reminded of his piece Le Passeur — decrepit and wandering, naked and blind, across a barren field, head under a shroud…the passage is important, akin to the accumulated effect of his images, as one supplants another, drawing the reader rapidly through as each piece blends together into a spastic archive of sublimated pains…a chronicle of momentary states forced into the world, as the artist purges himself of his ideas and desires, communicating them to us in myth and silent ikons, our reception of which forces us to become Le Passeur, moving through an apocalypse. With Tumoral Dreams in the background as a soundtrack to simultaneous decay and resurrection. Newsreel voices fading and incoherent, as the voices of these portraits are recorded and filed into history.

The figures in Nihil’s book are incarnations of violent impulses against all our illusions of self, demon parodies of what we consider best in ourselves, degraded and wallowing in filth, undone by our biology and the stupidity of our will. An abstract reflection of the desires we consider most noble. Nihil’s “Ventre” is less of a book than a series of surgical mirrors, a hermeneutics of our nervous system, delivered silently and shared between the blind, ignorant of its import, if any — soon lost amongst so many competing and affirmative visions of the world. His work is less art than it is ancient wisdom reborn for modern civilization. Constantly aware that there’s nothing new under the sun, he does not set out to create something original so much as translate what we’ve always known into a new language. Beyond trivial aesthetics, Nihil has aligned himself instead with the void. The yearning for the deafness following an explosion… Nihil’s vision (or his blindness) is summarized in the final text, Metastatic Awareness, which reads like a metaphysical manifesto. The intellectual key to Nihil’s entire project: “We must forget everything. Forget the world, forget ourselves and forget the illusion of being individuals, for we only exist together. We must return to the initial state, when men had no face and dreamed together. Then reality as we know it will perish with us.” 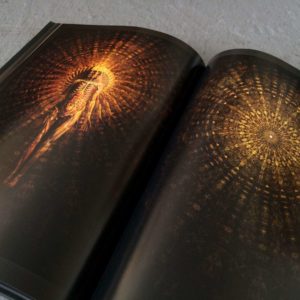 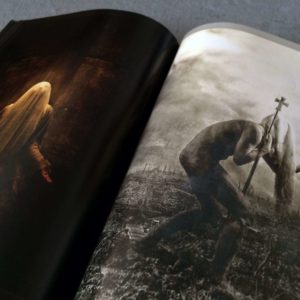 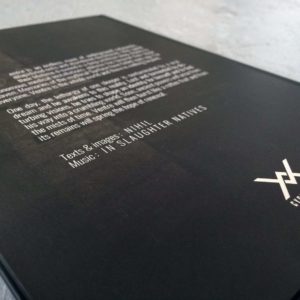 Kevin Pinkerton is a Canadian writer. He is currently working on his first novel.